Wow.  What started off a little slow turned into a race to the end.  I couldn’t read it fast enough.  The Liberty Box by C.A. Gray sucked me in, and I couldn’t escape.  What a great story.  And pretty scary too as in it feels rooted in just enough reality that I felt tempted to pinch myself to make sure that I am really living the life I think I am 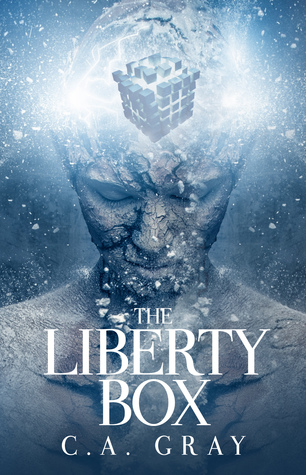 The Liberty Box is an expertly crafted, wonderfully written, and a very refreshing take the dystopian genre.  All the dystopian stories I have read to date take on the notion of factions, divisions, sectors, camps, [insert any SAT word synonym of your choice here]….  They have all started to meld together and I couldn’t tell you which story, be it the Divergent Series or Hunger Games, ended which way (without looking it up anyway, or watching the movie).  And those that haven’t ventured into the land of the factions typically involve some sort of disease (Masque of the Red Death or Legend), “game”/”test” (Maze Runner), or other singular event.  Here, Liberty Box isn’t wholly different in that there is a single event that caused the US as we know it to change.  But, the economic collapse and the idea that it is just here in the US (versus the entire world, or ignoring the fact that the rest of the world, at least at some point existed too) are both unique.  And how society is saved is quite frankly, frightening.  In part because it totally felt like something that could absolutely happen and we could all be turned into (in the words of the Crone) mindless “sheep” (although that too bears some similarity to the drug induced society of the Giver).

The plot of the story starts out like this: Kate, a young and beautiful reporter who beams into the nation’s households every night on the newscast suddenly discovers that an enemy of the state, who has been executed, is someone she knew when she was younger.  And when she starts to look into why, her fiance is killed.  Now on the run, Kate finds herself “off the grid” and away from the control of society.  Jackson, born in the US but raised in Iceland where he learned to control his mind and body from his grandfather, is back in the US for his

mother’s funeral.  But, not all is as it seems in the Republic of the United States.  Yes, the former democratic US is now a republic.  Kate and Jackson find themselves in a forest with others and what they do about the world they are now faced with is the

To me, this seems to have the potential to be the next in the Divergent, Hunger Games movie spree.  I can totally picture the great scenery, characters, chases, and action up on the big screen.  I know I would pay to see this story brought to life.  While decidedly YA, it’s also scarier than HG or Divergent – as it seems so much more plausible and it isn’t hard to imagine someone with the financial means to create a supercomputer that can separate and segregate society the way the Potentate has done here.  It reminded me a little of  a number of movies that seemed to have just enough basis in reality to be much more frightening than the blood and gore horror movie.  They way Eagle Eye was much scarier (to me anyway) than World War Z or Saw.

Well written and well paced, there were fewer plot holes then I have found with most of the other dystopian stories I have read.  And the end was quite a surprise.  One that I can say I certainly didn’t expect or see coming.  My only critique is that the characters, Kate especially, at times felt a little two-dimensional.  It shouldn’t be that Bruce the Shark (from Finding Nemo for those who aren’t huge Disney fans like me)

has more depth than some of the main protagonist.  There may be a reason for this in Kate’s case, maybe Kate is supposed to be that way because of the way she is raised.  But some of the others, especially Jackson, didn’t feel like they have quite enough personality. Regardless, I think the development for some characters needs a little work. I would love to see the great promise that some of the characters have be fulfilled.  However, this was not enough to shape the overall thoughts about the book; I believe Ms. Gray has provided yet another wonderful story and I am eager to see what happens to the characters next.

I often get books from Netgalley or even sometimes the authors themselves. Netgalley connects me with the publishers. What does this mean? I get books free sometimes from the folks trying to sell/market them. It is always in exchange for an honest review (and you can see that the good comes with the bad). Guess that makes my tiny little blog subject to some of the FTC's rules on endorsements. Just wish I made the money celebrities do endorsing stuff... You have been warned!